Kyle Koehler announced that before deciding to run for State Representative in the 79th District he ask two important groups of people. "First I asked my family.  Upon their approval, I asked the members of the local Republican Party.  I asked members of both the Central and Executive Committees.", Koehler stated.

As a result, Citizens To Elect Kyle Koehler is pleased to announce overwhelming support from the committees with thirty-nine members signing the following petition of support. 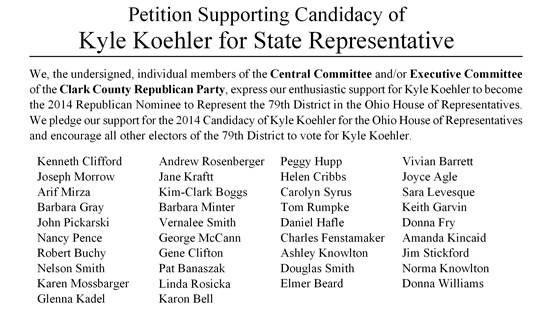 "I want to personally thank the members of the Central and Executive Committees for their support.  I am encouraged by their enthusiastic support of my candidacy for the 79th District", Koehler responded.